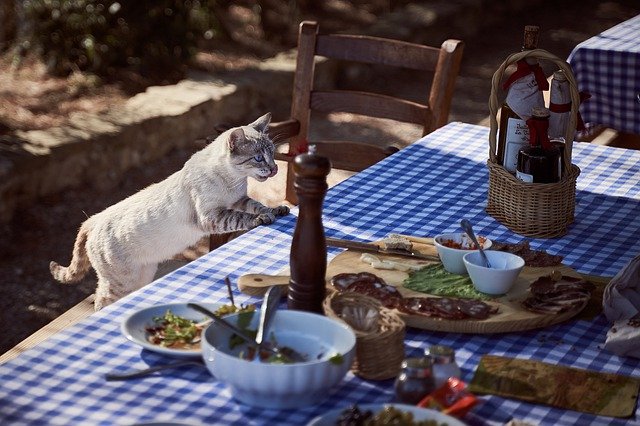 Last week, my dog Stewie was feeling under the weather, so we visited the vet . His symptoms indicated that he may have pancreatitis. Lab work revealed this wasn’t the case; rather, he has a bacterial infection that we are treating.

However, pancreatitis is common in both dogs and cats, and table scraps or getting into the garbage can often be the culprit. Especially around the holidays when there are lots of tempting foods and aromas around, it’s important for pet owners to know the signs of pancreatitis and to get treatment as soon as possible if the disease is suspected.

The pancreas is a gland in the abdomen that produces enzymes to help digest food. It also produces hormones such as insulin that are secreted into the blood. If, because of injury or disease, these digestive enzymes become activated within the pancreas before they are released, they will begin digesting the pancreas itself. This causes severe inflammation called pancreatitis, which is associated with pain and tenderness of the abdomen.

There are two forms of pancreatitis: acute (occurs suddenly) and chronic (happens over time). Both forms can be mild or severe, and their signs can be very similar.

Acute pancreatitis can occur after a dog eats a fatty food such as pork, beef and some other human foods. Dogs that get into garbage can develop pancreatitis.

Chronic pancreatitis can result from repeated episodes of acute pancreatitis, but in most instances, it is unclear what causes the disease to become chronic.

Pancreatitis can also be caused by certain medications and some viral or bacterial infections. Dogs that are obese or have diabetes are at greater risk for developing pancreatitis. Some breeds, such as miniature Schnauzers are also predisposed to the disease.

The signs associated with pancreatitis can be mild or severe and include:

Temperature will vary in pets with pancreatitis, but usually the temperature will be higher than normal at the onset of the disease and then fall to below normal as the condition progresses.

The eyes may become sunken, and the mouth and eyes may become very dry, often a sign of dehydration. These symptoms are not unique to pancreatitis; therefore, tests are often needed to confirm a diagnosis.

Severe pancreatitis can cause life-threatening damage to …….